Part of my summer holiday reading is the book Java Power Tools, by John Ferguson Smart.

I count a computer book a good buy if I get one new idea from it; two is stellar; and three or more goes on my "Recommend to Colleagues" list. This one is on the list... Ideas I`ve picked up include:

For graph visualization, SchemaSpy, Doxygen and UMLGraph all use the GraphViz application. This looks like a great tool in its own right. It provides a DSL for specifying graph structures and node and edge symbology, along with a layout and rendering engine which outputs to numerous different formats.

JPT of course covers all the better-known tools such as Ant, Maven, CVS, SVN, JUnit, Bugzilla, Trac, and many others. It doesn`t replace the documentation for these tools, but it does give a good comparative overview and enough details to help you decide which ones you`re going to strap around your waist for the next project.

Be the most popular tile on your block

You might think that the image below is a map of North America population density. You'd be off by one level of indirection...

In fact it's a heat map of the access frequency for Virtual Earth map tiles. 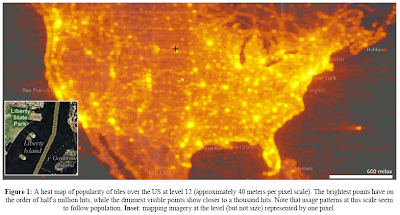 So really it's not an image of where people are, but where they want to be...

The image comes from a paper out of Microsoft Research: How We Watch the City: Popularity and Online Maps, by Danyel Fisher.

Makes me wonder if there are tiles that have never been accessed. Like perhaps this one? (It took a looong time to render....) 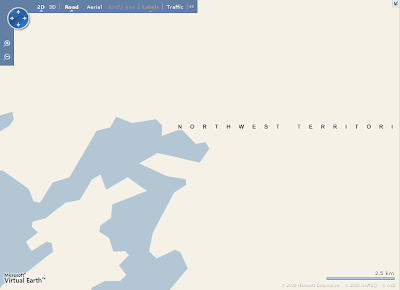 And what is the most-accessed tile? This one, perhaps? 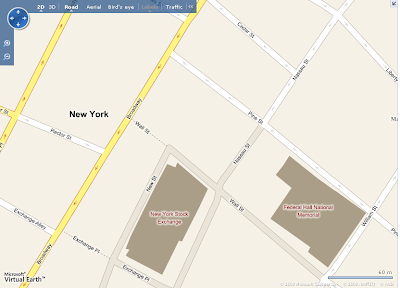 This great graph shows why we're all going to wrassling with parellelization for the rest of our coding lives: 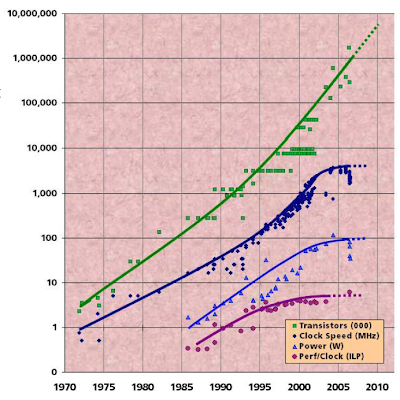 Also see this course outline for an sobering/inspiring view of where computation is headed.
Posted by Dr JTS at 22:47 10 comments:

Andrew Binstock has an interesting interview with Don Knuth.

Professor Knuth makes a few surprising comments, including a low opinion of the current trend towards multicore architectures. Knuth says:

To me, it looks more or less like the hardware designers have run out of ideas, and that they’re trying to pass the blame for the future demise of Moore’s Law to the software writers...

But then he goes on to admit:

I haven’t got many bright ideas about what I wish hardware designers would provide instead of multicores...

Which seems to me to make his complaint irrelevant, at best. (Not that I don't sympathize with his frustration about banging our heads against the ceiling of sequential processing speed. And as the sage of combinatorial algorithms he must be more aware than most of us about the difficulties of taking advantage of concurrency.)

Another egregious Knutherly opinion is that he is "biased against the current fashion for reusable code". He prefers what he calls "re-editable code". My thought is that open source gives you both options, and personally I am quite happy to reuse, say, the Java API rather than rewriting it. But I guess when most of your code is developed in your own personal machine architecture (Knuth's MIX) then it's a good thing to enjoy rewriting code!

In the end, however, I have to respect the opinions of a man who has written more lines of code and analyzed more algorithms than most of us have had hot dinners. And I still place him in the upper levels of the pantheon of computer science, whose books all programmers would like to have seen gracing their shelves - even if most of us will never read them!

And yes, this post is mostly an excuse for some korny alliteration - but the interview is still worth a read. (Binstock's blog is worth scanning too - he has some very useful posts on aspects of Java development.)
Posted by Dr JTS at 16:01 3 comments: