A peerless pastiche by SWWTMTOTH...  Try it, it works!  Go ahead, make it your homepage! 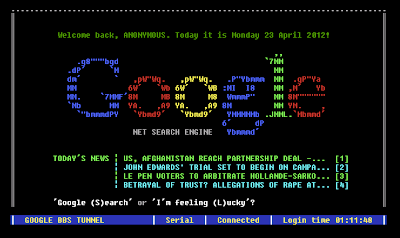 Hands up all those who remember modem whistles.  Takes me back...    For maximum verisimilitude, every other time you hit this site it should give you a busy signal.

Little known fact - DSL and cable modems actually make the same sounds, they're just pitched too high to hear  8^
Posted by Dr JTS at 18:23 No comments:

Last week I was at FOSS4G-NA in Washington DC.  It was my first time in DC, and my first FOSS4G as a member of the OpenGeo team. Both were very pleasant experiences!

One of the keynotes was by Josh Berkus of PostgresQL talking about "firehose databases".  FOSS4G is always a firehose conference, and this one was no exception.  I missed many more talks than I wanted to take in, for various reasons - the 3 simultaneous tracks, my own commitments to talks and OpenGeo work, and often because it's just such a good chance to talk to great people from all around the FOSS4G world.

Here are some of the my conference highlights:

Here's a few other reviews from around the web: