I just saw this blog post in rebuttal to Martin Fowler's DatabaseThaw article. It's a typically well-thought out response from Typical Programmer. The short summary is that he rejects Fowler's criticism of using RDB's as the mechanism for application integration. (And don't dismiss him as simply a RDB bigot - he's not shy about nailing relational gurus, as in Relational Database Experts Jump The MapReduce Shark).

TP's arguments ring true to me, although in my experience it takes a very concientious DB shop to fully maintain the "encapsulation of data and operations" across many applications, many custodians, and many developers.

It would be great if Fowler's vision of the integration point being HTTP rather than SQL solved all our problems. Loose coupling is a wonderful thing to have. But so far I'm not seeing how this provides equivalent performance for all cases, and how it avoids the problem of data model mismatch.
Posted by Dr JTS at 10:58 2 comments:

Martin Fowler has a great blikiTM post on DatabaseThaw. The soundbite is something like "What happens after relational DBs?". He has some interesting links to things like Drizzle.

His opinon of relational DBs is that

their dominance is due less to their role in data management than their role in integration
This makes sense, but I think they also have offered the benefit of providing a fairly powerful, standard way of modelling and querying data. Over the lifetime of this technology this has fought off some powerful challengers, notably object-oriented data modelling. (Although perhaps this battle was only won by becoming more like the "loser"). The latest challenger is semantic data modelling (RDF, SPARQL, etc). Perhaps the world is ready to make this transition - although I'm not rushing to sell my Oracle stock.

He also makes a good point that the focus of integration is shifting from the DB to the Web. Hard to argue with this... the clouds are moving in!
Posted by Dr JTS at 17:22 5 comments: 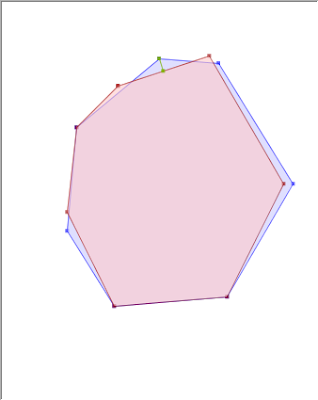 Hausdorff Distance between two polygons
With this validator written and some test datasets run I can finally confirm that CascadedPolygonUnion actually works!
Posted by Dr JTS at 06:21 1 comment:

I'm happy to announce that after a long gestation JTS 1.10 has been released. (This is my contribution to help fulfill James Fee's prediction 8^)

The package is available on SourceForge here.

There are numerous enhancements in this version. The highlights are:
The full list of changes is: