As the title of this blog indicates, I'm a fan of linearity.  But sometimes a little non-linearity makes things more interesting.  A convenient way to generate non-linear curved lines is to use Bezier Curves.  Bezier Curves are curves defined by polynomials.  Bezier curves can be defined for polynomials of any degree, but a popular choice is to use cubic Bezier curves defined by polynomials of degree 3.  These are relatively easy to implement, visually pleasing, and versatile since they can model ogee or sigmoid ("S"-shaped) curves.

A single cubic Bezier curve is specified by four points: two endpoints forming the baseline, and two control points.  The curve shape lies within the quadrilateral convex hull of these points.

Note: the images in this post are created using the JTS TestBuilder. 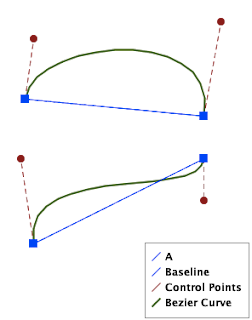 A sequence of Bezier curves can be chained together to form a curved path of any required shape. There are several ways to join composite Bezier curves.  The simplest join constraint is C0-continuity: the curves touch at endpoints, but the join may be a sharp angle.  C1-continuity (differentiable) makes the join smooth. This requires the control vectors at a join point to be collinear and opposite.  If the control vectors are of different lengths there will be a different radius of curvature on either side.  The most visually appealing join is provided by C2-continuity (twice-differentiable), where the curvature is identical on both sides of the join.  To provide this the control vectors at a vertex must be collinear, opposite and have the same length. 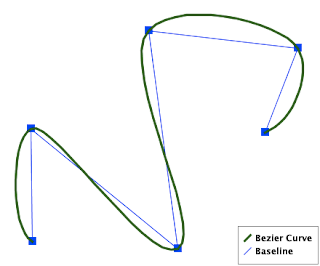 Bezier Curve with C2-continuity
A recent addition to the JTS Topology Suite is the CubicBezierCurve class, which supports constructing Bezier Curves from LineStrings and Polygons.  JTS only supports representing linear geometries, so curves must be approximated by sequences of line segments. (The buffer algorithm uses this technique to approximate the circular arcs required by round joins.)

Bezier Curve approximated by line segments
Bezier curves can be generated on both lines and polygons (including holes): 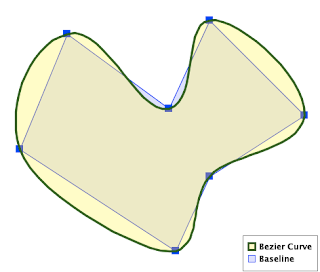 Bezier Curve on a polygon

There are two ways of specifying the control points needed to define the curve:

The easiest way to define the shape of a curve is via the parameter alpha, which indicates the "curvedness".  This value is used to automatically generate the control points at each vertex of the baseline.  A value of 1 creates a roughly circular curve at right angles.  Higher values of alpha make the result more curved; lower values (down to 0) make the curve flatter. 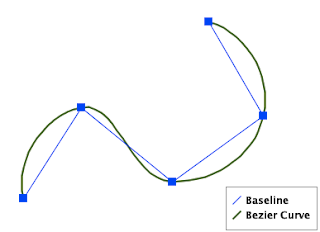 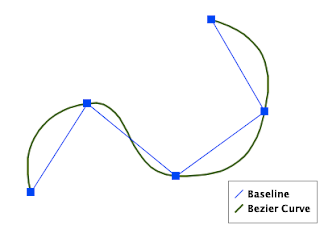 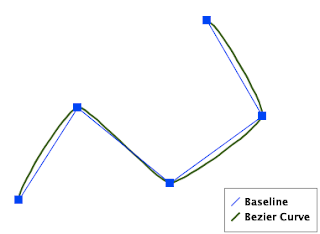 Alternatively, the Bezier curve control points can be provided explicitly.  This gives complete control over the shape of the generated curve.  Two control points are required for each line segment of the baseline geometry, in the same order.  A convenient way to provide these is as a LineString (or MultiLineString for composite geometries) containing the required number of vertices. 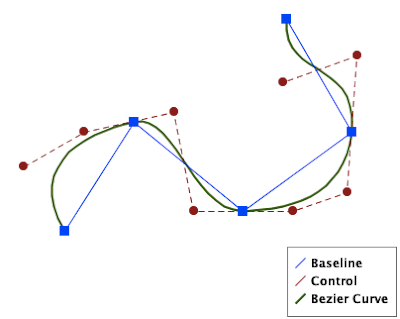 When using this approach only C0-continuity is provided automatically.  The caller must enforce C1 or C2-continuity via suitable positioning of the control points. 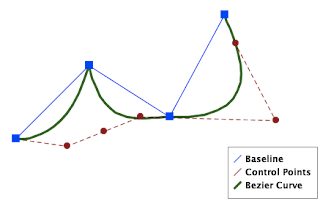 A common spatial need is to find a polygon that accurately represents a set of points.  The convex hull of the points often does not provide this, since it can enclose large areas which contain no points.  What is required is a non-convex hull, often termed the concave hull. 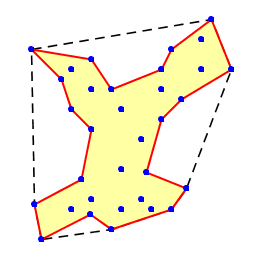 The Convex Hull and a Concave Hull of a point set

A concave hull is generally considered to have some or all of the following properties:

For a typical point set there are many polygons which meet these criteria, with varying degrees of concaveness.  Concave Hull algorithms provide a numeric parameter which controls the amount of concaveness in the result.  The nature of this parameter is particularly important, since it affects the ease-of-use in practical scenarios.  Ideally it has the following characteristics:

This is a well-studied problem, and many different approaches have been proposed.  Some notable ones are:

Of these, Delaunay Erosion (Chi-shapes) offers the best set of features.  It is straightforward to code and is performant.  It uses the control parameter of Edge Length Ratio, a fraction of the difference between the longest and shortest edges in the underlying Delaunay triangulation.  This is easy to reason about, since it is scale-free and corresponds to a simple property of the point set (that of distance between vertices).  It can be extended to support holes.  And it has a track record of use, notably in Oracle Spatial. 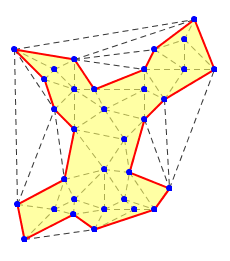 Recently the Park-Oh algorithm has become popular, thanks to a high-quality implementation in Concaveman project (which has spawned numerous ports).  However, it has some drawbacks.  It can't support holes (and likely not disconnected regions and discarding outlier points).  As the paper points out and experiment confirms, it produces rougher outlines than the Delaunay-based algorithm.  Finally, the control parameter for Delaunay Erosion has a simpler geometrical basis which makes it easier to use.

Given these considerations, the new JTS ConcaveHull algorithm utilizes Delaunay Erosion. The algorithm ensures that the computed hull is simply connected, and contains all the input points.  The Edge Length Ratio is used as the control parameter. A value of 1 produces the convex hull; 0 produces a concave hull of minimal size.  Alternatively the maximum edge length can be specified directly. This allows alternative strategies to determine an appropriate length value; for instance, another possibility is to use a fraction of the longest edge in the Minimum Spanning Tree of the input points.

The recently-added Tri data structure provides a convenient basis for the implementation,.  It operates as follows:

Thanks to the efficiency of the JTS Delaunay Triangulation the implementation is quite performant, approaching the performance of a Java port of Concaveman. 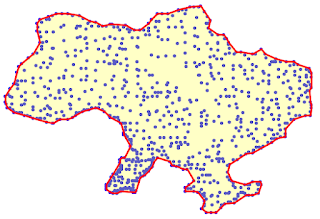 Optionally holes can be allowed to be present in the hull polygon (while maintaining a simply connected result).  A classic demonstration of this is to generate hulls for text font glyphs: 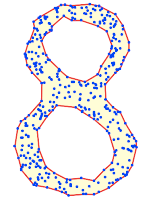 This algorithm is in the process of being ported to GEOS.  The intention is to use it to enhance the PostGIS ST_ConcaveHull function, which has known issues and has proven difficult to use.

Offset curves (also known as parallel curves) are an oft-requested feature in JTS.  They are a natural extension to the concept of buffering, and are useful for things like placing labels along rivers.  As far as I know there is no hard-and-fast definition for how an offset curve should be constructed, but a reasonable semantic would seem to be "a line lying on one side of another line at a given offset distance".

Here's an image of offset curves on both sides of a river reach from a US rivers dataset:

GEOS acquired an implementation to produce offset curves a few years ago.  However, it has some known bugs (such as producing disconnected curves, and including extraneous segments).  It also has the feature (or quirk?) of potentially producing a result with multiple disjoint curves for a single input line.

The GEOS implementation generates a raw offset curve (potentially full of self-intersections and unwanted linework) and then determines the intersection of that curve with the buffer boundary.  However, the use of intersection on linework is always tricky.  The buffer geometry is necessarily only a (close) approximation, and the buffer algorithm takes advantage of this to use various heuristics to improve the quality and robustness of the generated buffer linework.  This can cause the buffer linework to diverge from the raw offset curve.  The divergence makes the intersection result susceptible to errors caused by slight differences between the generated curves. The two issues above are caused by this limitation.

Instead of using intersection, an effective technique is to match geometry linework using a distance tolerance.  This is the approach taken in the new JTS Offset Curve algorithm. The high-level design is

To make the matching efficient a spatial index is created on the buffer curve segments.
This algorithm provides the following semantics:
This algorithm does a fine job at generating offset curves for typical simple linework.  The image below shows a family of offset curves on both sides of a convoluted line. 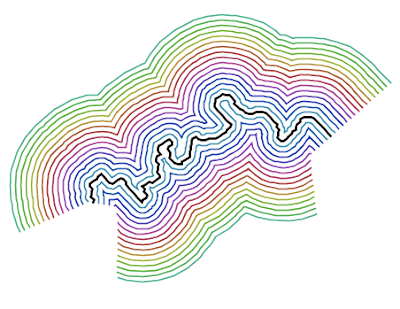 This resolves both of the GEOS code issues.  It also supports parameters for join style (round, bevel, and mitre), number of quadrant segments (for round joins) and mitre limit: 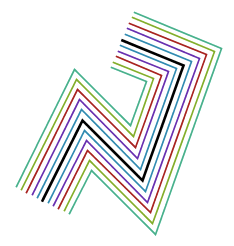 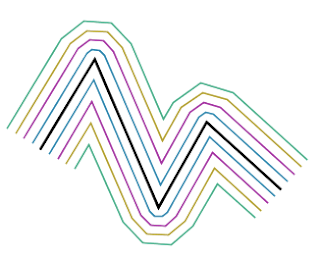 Join Style = ROUND; Quadrant Segments = 2
There are also a few nuances required to handle some tricky situations; in particular, cases when the input line string curves back on itself and when it self-intersects.  These do not have a clear definition for what the result should be.  Moreover, the algorithm itself imposes some constraints on how these cases can be handled.  The images below show how the algorithm behaves in these cases.
"Loopbacks"produce offset curves representing only the "exposed" sections of the input linework:

Offset Curves of a Line with "loop-backs"
For a self-intersecting input line, the offset curve starts at the beginning of the input line on the specified side, and continues only up to where the line side changes due to the crossing.  The length of the offset curve is also reduced by the requirement that it be no closer than specified offset distance to the input line: 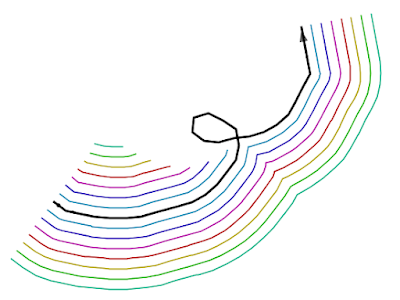 Offset Curves of a Line with a self-intersection
This algorithm is now in JTS, and has been ported to GEOS.