Running commands in the JTS TestBuilder

The JTS TestBuilder is a great tool for creating geometry, processing it with JTS spatial functions, and visualizing the results.  It has powerful capabilities for inspecting the fine details of geometry (such as the Reveal Topology mode).  I've often thought it would be handy if there was a similar tool for PostGIS.  Of course QGIS excels at visualizing the results of PostGIS queries.  But it doesn't offer the same simplicity for creating geometry and passing it into PostGIS functions.

Combined with the versatile Postgres command-line interface psql, this allows running a SQL statement and loading the output as geometry. Here's an example of running a PostGIS spatial function.  In this case a MultiPoint geometry has been digitized in the TestBuilder, and processed by the ST_VoronoiPolygons function.  The SQL output geometry is displayed as the TestBuilder result. 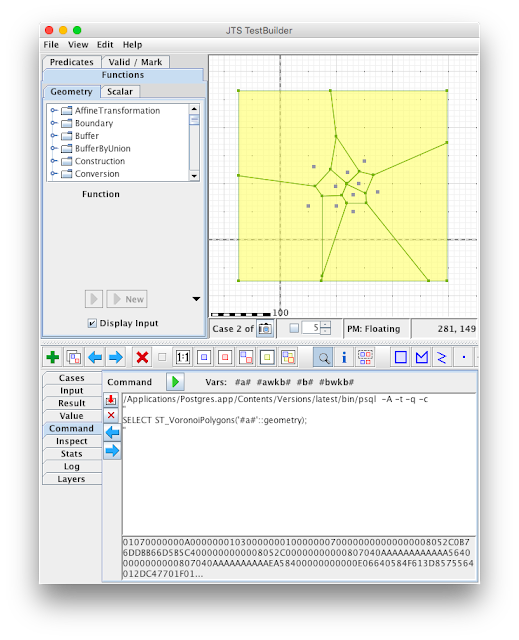 The command run is:

This also makes it easy to load data from PostGIS to make use of TestBuilder geometry analysis and visualization capabilities.  The query can be any kind of SELECT statement, which makes it easy to control what data is loaded.  For large datasets it can be useful to draw an Area of Interest in the TestBuilder and use that as a spatial filter for the query.  The TestBuilder is able to load multiple textual geometries, so there is not need to collect the query result into a single geometry. 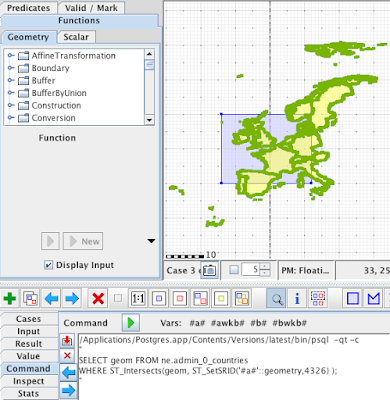 Another use for commands is to load data from the Web, by using curl to retrieve a dataset.  Many web spatial datasets are available in GeoJSON, which loads fine into the TestBuilder. Here's an example of loading a dataset provided by an OGC Features service (pygeoapi): 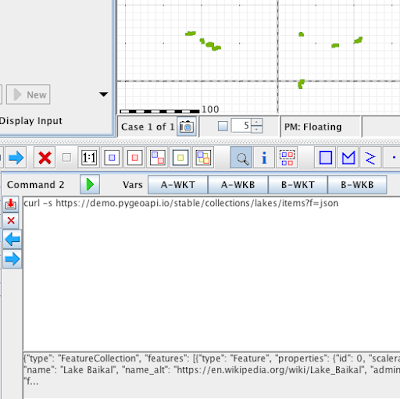 
The Command panel provides a simple UI to make it easier to work with commands.  Command text  can be pasted and cleared.  A history of commands run is recorded for the TestBuilder session.  Recorded commands in the session can be recalled via the Previous and Next Command buttons.
Buttons are provided to insert substitution variable text.

It can happen that a command executes successfully, but returns output that cannot be parsed.  This is indicated by an error in the Result panel.  A common cause of this is that the command produces logging output as well as the actual geometry text, which interferes with parsing.  To aid in debugging this situation the command window shows the first few hundred characters of command output.  The good news is that many commands offer a "quiet mode" to provide data-only output.

Unparseable psql output due to presence of column headers.  The pqsl -t option fixes this.

If you find an interesting use for the TestBuilder Command capability, post it in the comments!
Posted by Dr JTS at 21:40 No comments: