A (long) while ago I posted about "soon-to-be-released" JTS code for polygon triangulation using Ear Clipping.  It turned out it was actually in the category of "never-to-be-released".  However, later  I worked with a student, Dan Tong, on a coding exercise sponsored by Facebook. We decided to tackle polygon triangulation.  By the end of the project he implemented a functional algorithm, including handling holes (via the hole-joining technique described by Eberly).  To make it release-ready the code needed performance and structural improvements.  This has finally happened and the code is out!

The new codebase has been substantially rewritten to improve modularity and the API.  A new data structure to represent triangulations has been introduced, called a Tri  It is simpler, more memory efficient, and easier to work with than the QuadEdge data structure previously used in JTS. It provides an excellent basis for developing further algorithms based on triangulations (of which more below)

Performance must be benchmarked against an existing implementation.  Geometry maestro Vladimir Agafonkin has developed an Ear Clipping algorithm in Javascript called Earcut.  It's claimed to be the fastest implementation in Javascript.  Indeed the performance comparison shows Earcut to be over 4 times faster than some other Javascript triangulation implementations.  Earcut has been ported to Java as earcut4j, which allows comparing JTS to it.

So JTS ear clipping is not quite as fast as Earcut4j.  But it's still plenty fast enough for production use!

The triangulation algorithm is exposed as the PolygonTriangulator class (deliberately named after the effect, rather than the algorithm producing it).  Here's an example of the output: 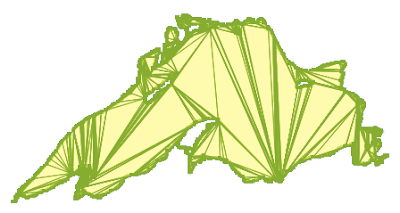 The output of PolygonTriangulator is guaranteed to be a valid triangulation, but in the interests of performance it does not attempt to produce a high-quality one.  Triangulation quality is measured in terms of minimizing the number of "skinny" triangles (or equivalently, maximizing the sum of the interior angles).  Optimal quality is provided by Constrained Delaunay Triangulation (CDT).  In addition to being optimal in terms of triangle shape, the CDT has the nice properties of being (essentially) unique, and of accurately representing the structure of the input polygon.  It also removes the influence that Hole Joining holes has on the raw triangulation provided by Ear-Clipping.

I originally proposed that a CDT can be achieved by a Delaunay Improvement algorithm based on iterated triangle flipping.  It turned out that this technique is not only effective, but also pleasingly performant.  This is implemented in the ConstrainedDelaunayTriangulator class.  Running it on the example above shows the improvement obtained.  Note how there are fewer narrow triangles, and their arrangement more closely represents the structure of the polygon. 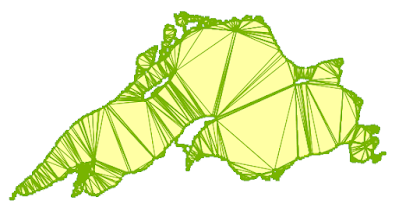 It seems possible to adapt the machinery for Ear Clipping to provide two other useful constructions:

The property of the Constrained Delaunay Triangulation of representing the structure of the input polygon could provide a basis for computing the following constructions:
The Tri data structure provides a simple representation of a triangulation.  I expect that it will facilitate the development of further JTS triangulation algorithms, such as: