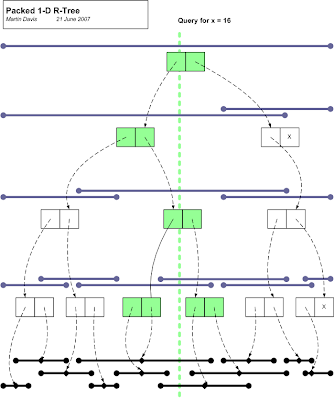 Some geometry algorithms depend on searching a fixed set of 1-dimensional intervals for the ones which contain a given value. An example is Point-In-Polygon testing using the stabbing line method. In cases where the algorithm needs to be run multiple times for different input values, the performance can be improved if a suitable data structure is used to increase the efficiency of search.

Here's an idea for an index which allows fast lookup of 1-dimensional intervals. It is basically a 1-dimensional R-tree, with a packing scheme which allows easy creation of the index for a fixed set of intervals. The index has the following charateristics:
The tree contains two types of nodes: leaf nodes, which contains the stored intervals (and any additional user-specific information), and interior nodes, which contain an interval and references to two child nodes which lie in that interval.

To build the tree:
Searching the tree is simple:
A nice aspect of this data structure is that it is simple to build. It should be possible to implement the structure using two arrays, one for leaf nodes and one for interior nodes. This should provide a pretty efficient and straightforward implementation in C.

The interior node definition can easily be generalized to allow n intervals per node (the bucket size). Of course, there's a trade-off between increasing fan-out and decreasing selectivity. It's not obvious to me where the sweet spot is.

There are several (lots?) of other data structures for efficiently querying sets of intervals. The segment tree and interval tree are probably the most well-known. Both of these structures are more complex to understand and implement, I believe. In addition, I don't think that they are amenable to an implementation based solely on two simple arrays.
Posted by Dr JTS at 09:25

I *think* I was just talking to Sean Gillies about this very same idea. However, when I explain it, I sounded like a stoner, rather than an engineer.

Well, actually my idea as a little different... storing geometry permanently as trees. Then it'd have intrinsic tree pruning for fast searching, but also brain-dead same-SRS rasterization into tilesets.

Storing geometry as a tree is an interesting idea. The 1D-R-tree isn't going to do this for you of course, but there are lots of other options. Hanan Samet's bible-of-spatial-indexes I think talks about that a bit.

Seems to me that this would be heavily dependent on use case. There's a tradeoff between complexity of storage and the efficiency gain (as always)

Hard to get really new ideas in this world....

But you could always *implement* something cool - that's much rarer than just writing something up!