Limitations of Google Earth as a GIS Viewer 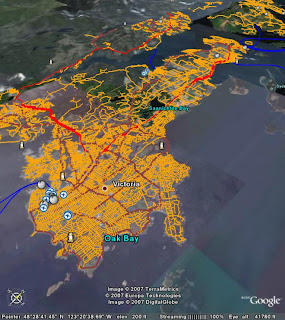 I'm starting to actually try and used Google Earth for viewing geospatial data - and almost immediately I'm hitting my head against the ceiling. It seeems to be sorely missing some very basic GIS functionality (or else I'm not reading the manual closely enough - but the limitations of the "manual" also make my head hurt). Where are things like:

And in the bigger picture

I could go on and on.... but bottom line for me is that apart from the cool 3D stuff, GE sux for data visualization compared to the various OSS tools out there such as WorldWind and (ahem) JUMP.

They did get some stuff right though... The mouse navigation is good - although I think WorldWind's is better. WW's use of the right mouse button is way faster (for me) than using magic disappearing on-screen controls.

And of course KML has created an instant de-facto cartographic standard (I deliberately do not call it a geospatial data standard). Although it's pretty limited as well - SVG is way richer.

So I wonder if and when these shortcomings will be addressed? More on that later...
Posted by Dr JTS at 21:21