A common spatial need is to compute a polygon which contains another set of polygons.  There are numerous use cases for this; for example:

This post describes a new approach for solving these problems, via an algorithm for computing a concave hull with polygonal constraints.  The algorithm builds on recent work on polygon triangulation in JTS, and uses a neat trick which I'll describe in a subsequent post.

The simplest way to compute an area enclosing a set of geometries is to compute their convex hull.  But the convex hull is a fairly coarse approximation of the area occupied by the polygons, and in most cases a better representation is required.

Here's an example of gap removal between two polygons.  Obviously, the convex hull does not provide anything close to the desired result: 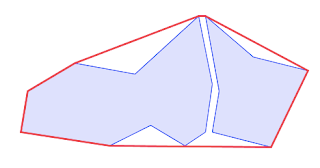 A popular suggestion is to buffer the polygon set by a distance sufficient to "bridge the gaps", and then "un-buffer" the result inwards by the same (negative) distance.  But the buffer computation can "round off" corners, which usually produces a poor match to the input polygons.  It also fills in the outer boundary of the original polygons.

Densifying the polygon boundaries helps, but introduces another problem - the computed hull can extend beyond the outer boundaries of individual polygons.  And it introduces new vertices not present in the original data.

What is needed is a concave hull algorithm that accepts polygons as constraints, and thus respects their boundaries.  The JTS Topology Suite now provides this capability in a class called ConcaveHullOfPolygons (not a cute name, but descriptive).  It provides exactly the solution desired for the gap removal example: 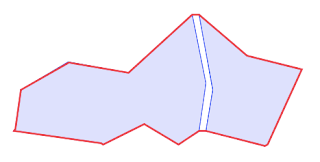 The Concave Hull of Polygons API

Like concave hulls of point sets, concave hulls of polygons form a sequence of hulls, with the amount of concaveness determined by a numeric parameter. ConcaveHullOfPolygons uses the same parameters as the JTS ConcaveHull algorithm.  The control parameter determines the maximum line length in the triangulation underlying the hull.  This can be specified as an absolute length, or as a ratio between the longest and shortest lines.

As usual, this code will be ported to GEOS, and from there it can be exposed in the downstream libraries and projects.

Examples of Concave Hulls of Polygons

Here are examples of using ConcaveHullOfPolygons for the use cases above: 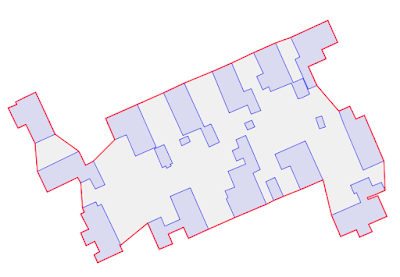 The concave hull of a set of block polygons for an oceanside suburb.  Note how the "tight" option allows the hull to follow the convoluted, fine-grained coastline on the right side. 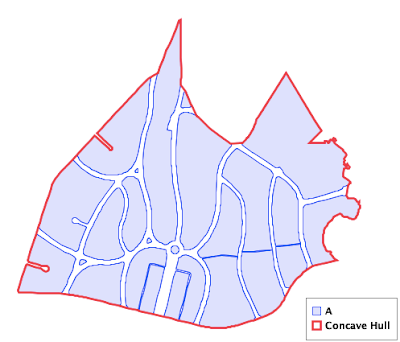 Polygons separated by a narrow gap can be merged by computing their concave hull using a small distance and keeping the boundary tight. 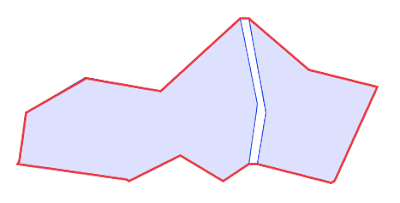 The "fill area" portion of the hull between two polygons can be computed as a separate polygon. This could be used to provide an "Extend to Meet" construction by unioning the fill polygon with one of the input polygons.  It can also be used to determine the "visible boundary", provided by the intersection of the fill polygon with the input polygon(s). 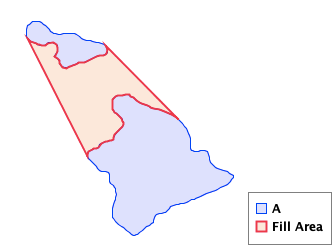