Polygonal Coverages and Operations in JTS

An important concept in spatial data modelling is that of a coverage.  A coverage models a two-dimensional region in which every point has a value out of a range (which may be defined over one or a set of attributes).  Coverages can be represented in both of the main physical spatial data models: raster and vector.  In the raster data model a coverage is represented by a grid of cells with varying values.  In the vector data model a coverage is a set of non-overlapping polygons (which usually, but not always, cover a contiguous area).

This post is about the vector data coverage model, which is termed (naturally) a polygonal coverage. These are used to model regions which are occupied by discrete sub-regions with varying sets of attribute values.  The sub-regions are modelled by simple polygons.  The coverage may contain gaps between polygons, and may cover multiple disjoint areas.  The essential characteristics are:

There are many types of data which are naturally modelled by polygonal coverages.  Classic examples include: 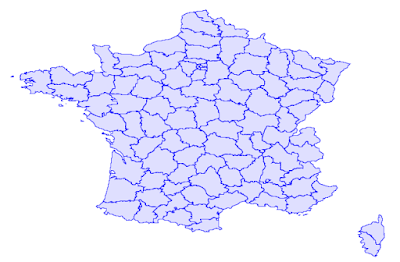 A polygonal coverage of regions of France

There are two ways to represent polygonal coverages: as a topological data structure, or as a set of discrete polygons.
A coverage topology consists of linked faces, edges and nodes. The edges between two nodes form the shared boundary between two faces.  The coverage polygons can be reconstituted from the edges delimiting each face.
The discrete polygon representation is simpler, and aligns better with the OGC Simple Features model.  It is simply a collection of polygons which satisfy the coverage validity criteria given above.
Most common spatial data formats support only a discrete polygon model, and many coverage datasets are provided in this form.  However, the lack of inherent topology means that datasets must be carefully constructed to ensure they have valid coverage topology.  In fact, many available datasets contain coverage invalidities.  A current focus of JTS development is to provide algorithms to detect this situation and provide the locations where the polygons fail to form a valid coverage.

Operations which can be performed on polygonal coverages include:

Implementing polygonal coverage operations is a current focus for development in the JTS Topology Suite.  Since most operations require a valid coverage as input, the first goal is to provide Coverage Validation.  Cleaning and Simplification are priority targets as well.  Coverage Union is already available, as is Overlay (in a slightly sub-optimal way).  In addition,  a Topology data structure will be provided to support the edge-node representation.  (Yes, the Topology Suite will provide topology at last!).  Stay tuned for further blog posts as functionality is rolled out.

As usual, the coverage algorithms developed in JTS will be ported to GEOS, and will thus be available to downstream projects like PostGIS.